The Legend Of Tatsuko From Semboku, Akita 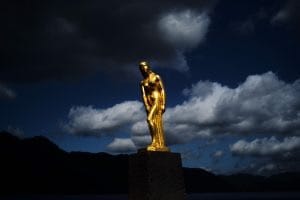 Tatsuko is a girl in the In-nai district near Tazawako lake, who is known for her beauty. But because she knew that her beauty would not last forever, she visited a shrine at the foot of Okurasan mountain in the Jindai area, to make a wish for everlasting beauty every night. On her 100th night, she finally received a message from God saying, “Go north. Find the sacred spring. Take a sip from there.” 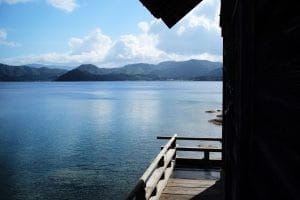 Located on Tazawako lakeside Katajiri, Kansagu is a modern-style shrine built with white wood. It is said to be a shrine for Ukiki, driftwoods of large trees, towering meters above the surface and dissapearing diagonally into the water. 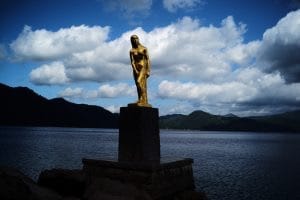 The legend of Tatsuko in Tazawako Semboku, Akita, Japan

Tatsuko climbed mountain after mountain. Finally, she reached the sacred spring. Delighted, she took a sip as she was told by God. The next moment, she realized that she had turned into a dragon. This is how the poor girl, Tatsuko, became the protective dragon of Lake Tazawa.

When Tatsuko was drinking the water from the holy spring with her delicate hands, she started craving for more. She was drinking so breathlessly and mindlessly that she started putting her face inside the water. The next moment, heavy clouds appeared over the mountains and there was a thunder storm. Soon, the pouring rain washed out everything and caused a landslide. The lightning temporarily blinded Tatsuko and she could not see herself. Finally, when she had calmed down, she looked at herself through the mirror to find that she had turned into a dragon.

Tatsuko then jumped into the water. She screamed out of misery and threw the burning torch into the lake. As the fire from the torch was put out, the torch turned black and it became a trout called kunimasu.

Name of statue : Statue of Tatsuko