Where Past and Present Meet

Iya Valley - A Refuge for Sightseers and Pilgrims Alike 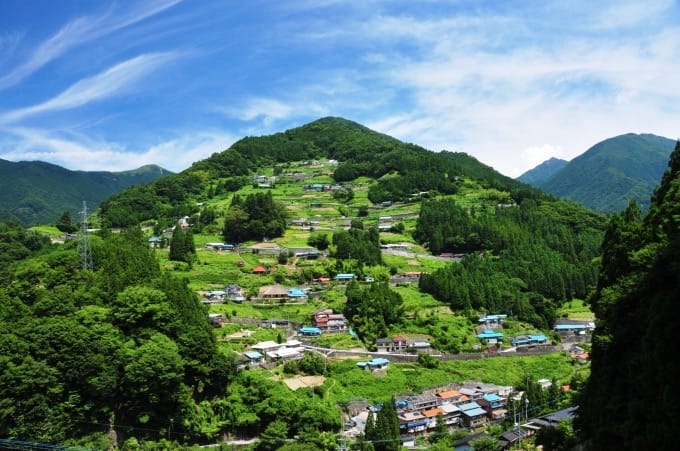 Nestled in the heart of Shikoku, the Iya Valley has long been a refuge for travelers - sightseers and pilgrims alike. Commonly known in Japan, in the late 12th century the Japanese samurai population divided into two sects followed by an enormous power struggle. The Heike clan warriors fled to the Iya Valley after their 12th century defeat at the hands of the Minamoto. Though I can’t make more than a dubious claim to warrior status, I too felt like I had escaped something. The hustle and bustle of the big city left behind, I was greeted with fresh verdant smells and lush colors - the stark white of the falling snow, the deep greens of the trees, and the sharp blue of the sky, unencumbered by tall buildings. Across from Oboke station was my first stop, a small supermarket called Boke Mart. The owner, Yamaguchi-san, immediately invited me in out of the cold for a cup of tea. As we ground tea leaves from one of the nearby hills into matcha, we chatted about the weather, traveling, and which local foods were considered specialties. Once I was sufficiently refreshed, she was kind enough to send me on my way with a daikon, a block of tofu, and a bottle of sake. This would be a recurring theme throughout my visit: though we were strangers, she treated me like an old friend.

Reside With Spirits and Hobgoblins of Yokai Lore 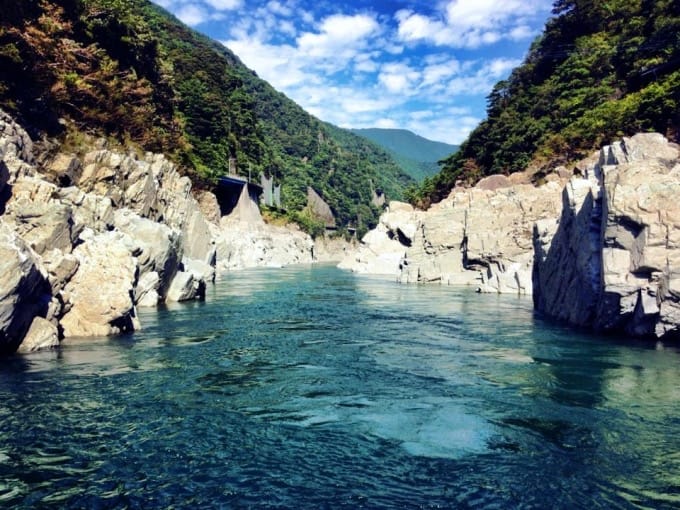 Not far away is Mannaka, a quaint restaurant and hotel perched at the side of the road above the Yoshino river. The theme inside is local yokai - spirits and hobgoblins of lore. There is even a table set up with a band of yokai dolls mid-feast! In keeping with the theme, I had the yokai hitotsume donburi, which is a delicious rice bowl with fresh vegetables, meat, and a single egg, sunny side up. The owner explained that the egg represents the single eye of the cyclops. I looked over at the table next to us - sure enough, a jolly cyclops was presiding over the feast at the head of that table. After eating, we proceeded down the stairs to the river below, where several barges were floating in wait. Our guide took us out on the river, narrating the trip for us as we snapped pictures. During cold weather, guests can warm up with the kotatsu heater on each boat. Next we headed over to Kazurabashi by car. This bridge, made of kiwi vines that are replaced every 3 years, is probably the most famous attraction in the valley. It stands 15 meters above the Iya river, suspended over a distance of about 45 meters. If you are wary of heights, it’s quite an adventure: you can see all the way down through the slats that serve as the walkway. I have rarely had occasion to feel more alive than I did standing at the center of the bridge, watching the river flowing swiftly beneath me and breathing deeply of the brisk country air. 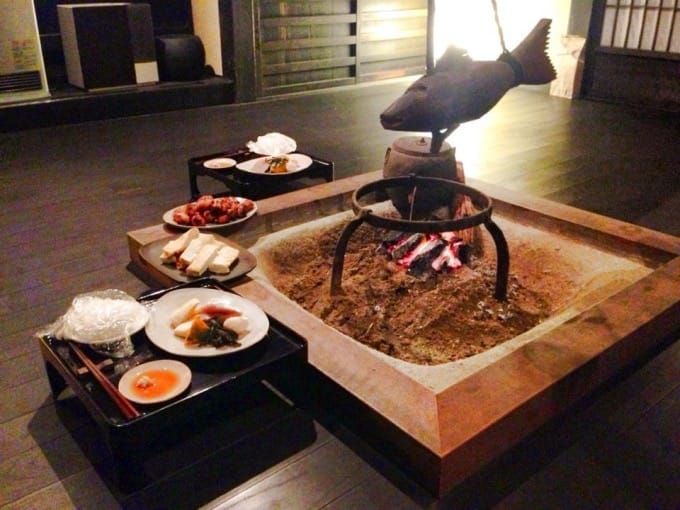 Anyone familiar with Alex Kerr’s Lost Japan will need no introduction to Chiiori, a gorgeous 300-year-old restored farmhouse. Approaching the house, my eye was immediately drawn to the side walls, which were constructed mainly of earth and bamboo. A thorough covering of thatch seals in the roof, and the front features splendid deck to ceiling windows. Once inside, I found myself surprised at just how warm it was. Walking through these rooms felt somewhat like stepping into a museum exhibit. The main room is expansive, the gleaming hardwood floor broken up only by the irori in the center of the room. If you haven’t seen an irori, don’t worry - they’re kind of rare these days. It’s a hearth shaped like a square lined with stone and inset into the floor. Irori are relics of a day gone by, a time when villagers would gather round and talk well into the night, telling stories and enjoying each other’s company. Because of the smoke generated by the fire, over the centuries, the inner walls and ceilings of traditional houses turn a shiny, beautiful black. I was staying in Fushou, one of seven cottages available on site. Inside, we were greeted by two friendly obaachans who were just getting started on our dinner. Much like Chiiori, Fushou is a traditional house with a thatched roof. The inside is luxuriously appointed. Black lacquered cabinets line the front room, which serves as a kitchen and dining area. A table that could comfortably accommodate six sits in the center. Off to the side are two heaters, a Bluetooth speaker system, a microwave, and various drawers, containing various stationery items and tea sets. The second main room features floor to ceiling windows, a television with cable, peaceful lighting, and two comfortable chairs for reading a book or just relaxing. Futons and bedding are tucked away in the closet on one side of the room. One can also find the wi-fi router and a humidifier in the cabinet below the television. Sufficiently impressed, and unable to further resist the smells of dinner, I sat down with my companions for dinner. Luscious pork onabe stew, Ma-po Tofu, fried spring rolls, and a large plate of local vegetables including tofu, daikon, and konnyaku were presented. As we ate and conversed the night away, surrounded by comfort, it occurred to me that this place was a perfect marriage of old and new.